A missing cat is home safe after being found in New York, more than 200 miles from home. Dex, who’s from Williamsport, Pennsylvania was found in New York after disappearing three months earlier. The Montgomery County, New York SPCA posted on Facebook that the cat was brought in by a Fort Plain resident who noticed Dex hanging around their neighborhood for multiple days. Dex was scanned for a microchip and the animal shelter was able to contact his family.

Sea Lion Safely Back in Water After Wandering into Oregon Neighborhood→ 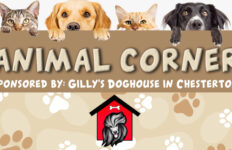